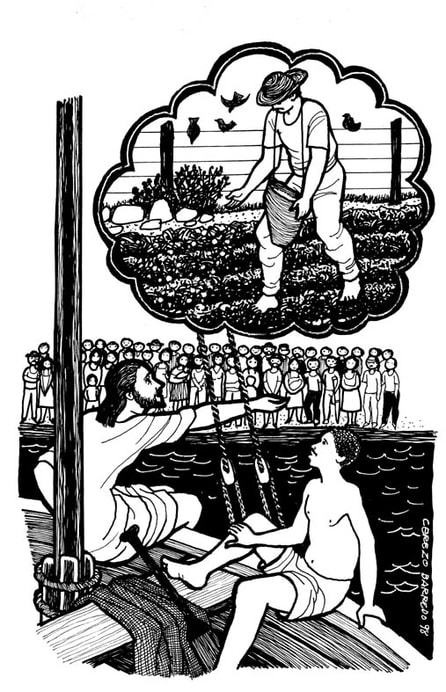 “It’s Jesus who makes it grow!” was all the words of a sister who visited our seminary one time; a good friend of our congregation. “I felt like I was listening to a parable of Jesus,” was the joke of one of my brothers who was enthusiastically listening to her story. I was full of amazement how sister patiently transformed a barren soil into a fertile ground for lush vegetables. I was full praise for her achievement knowing that sister had done a step-by-step process of tilling the soil until the time the shoots started to grow and bear fruit. She was so patient, but without giving credit to her work, she retorted: “the secret is in the preparation of the soil, but its all because of Jesus.”

Farming indeed is done in a very systematic process; its success depends so much on how the soil is prepared to make way for the seed to grow well. A farmer has to make sure that the seed must not be wasted and laid carefully on the seedbed before it could be transplanted. However, this kind of procedure in farming was not the same process that is traditionally done in Palestine. In Jesus’ time, the farmer sows first before he plows the field. No wonder why much of the seed is scattered on the ground that is unsuitable. Yet, while much is wasted, the seed that falls on good ground bears fruit in extraordinarily large measure.

It was ironic why Jesus was now teaching into a boat near the seashore while he interestingly tells them a story. People were so eager to listen to Jesus’ story as what the gospel describes: “large crowds gathered around him,” and “the whole crowd stood along the shore.” Likewise, at first Jesus was teaching at the synagogue. What then happened to him along the way? During this time, many of the Jewish leaders were on their way to shut him out of the synagogue and openly oppossing him, but who could stop Jesus to proclaim God’s Word? Could it be that this story of Jesus about the sower speaks so much about the Jewish authorities who refused to hear? The word to ‘hear’ for the Jews is equivalent to the Hebrew word ‘Shema’ which is the cornerstone and profession of their faith. Definitely, the primary teaching of Jesus is to invite the crowd in order to respond to the ‘Shema:’ Hear, O Israel! The Lord is our God, the Lord alone! (Deut. 6:4)

From the parable story of Jesus, we could learn that Jesus went out to sow ‘Seeds.’ His seeds are penetrating and are sown in the hearts of those who hear his “Words.” Jesus’ words are none other than Himself. Jesus is a seed sown sparingly to everyone, eventhough some people rejects him. Despite of which, Jesus shows his love and compassion, especially to the least in the society: the widow, the orphan, the sick, children, and sinners. Aside from that, Jesus also sows seeds of mercy. His boundless mercy melts the hardened hearts of sinners and his followers who denied him.

In our gospel today, Jesus is inviting us to allow the ‘Seed’ to grow in our hearts. How do we allow the seed to grow is up to us. Do we make way to cultivate our ‘soil’ to make way for the seed to grow? Or we remain as that of a ‘rocky ground,’ or ‘ground among path’ or ‘among thistles?’ It is good to know that the parable of the sower, is not interested in the amazing harvest, but on the fates of the seeds in the different kinds of soils. The fates of the seeds lies on the quality of the soil, but God continually sows hoping each seed will grow.

In our present time, it maybe unfortunate that many seeds are continually ‘wasted.’ Meanwhile, in many places there are so many who hungers for God’s ‘seeds,’ and many people would wish that it will be sown at them too. Mother Teresa recalls: “You will be surprised to know that in the poorest neighborhoods in many of the cities where we live and work, when we get close to the people who live in shacks, the first thing they ask for is not bread or clothes, even though often they are dying of hunger and are naked. They ask us to teach them the Word of God. People are hungry for God. They long to hear his Word.”

Read this info in our blog CJM News. Click here